One of the great things about living in Nevada has always been the opportunity to check out some live entertainment. Now we all know that the point most of that live entertainment is to draw people into the casinos, but there’s nothing wrong with that. There’s no law that says you’ve got to play a slot machine in order to enjoy whatever performers might be in the showroom or on stage in the lounge. (But no law that says you can’t play the slots, either!) It’s one of the principles upon which Reno, Tahoe and Las Vegas built their fortunes, but it extends to some of the smaller communities in the Silver State as well, from just a little bit in the Carson Valley, all the way across the state at Wendover on Interstate 80 and even up to Jackpot on U.S. Highway 93 on the Nevada-Idaho border. (Even though Jackpot is in Nevada and Nevada is on the Pacific time zone, Jackpot runs on Mountain time in alignment with Twin Falls, Idaho, the nearest community of any real size. I’ve never figured out how they can get away with that. But then again, who’s going to stop ‘em?) Photo at left, Pixabay.

The point I’m winding my way around to is that the whole live-entertainment aspect of life has been put on the back burner for the past year. No, more than that, it’s been wrapped in tinfoil and shoved into the back of the refrigerator on the bottom shelf. Which is why I was so delighted to check out the calendar of events coming up in April for Reno and find that there are a few gigs scheduled around town. And despite the venerable tradition of gaming establishments using live music as a hook to get you on site for a little gaming action, it’s actually some of the non-casino venues downtown that are blazing the trails back to normalcy for us. 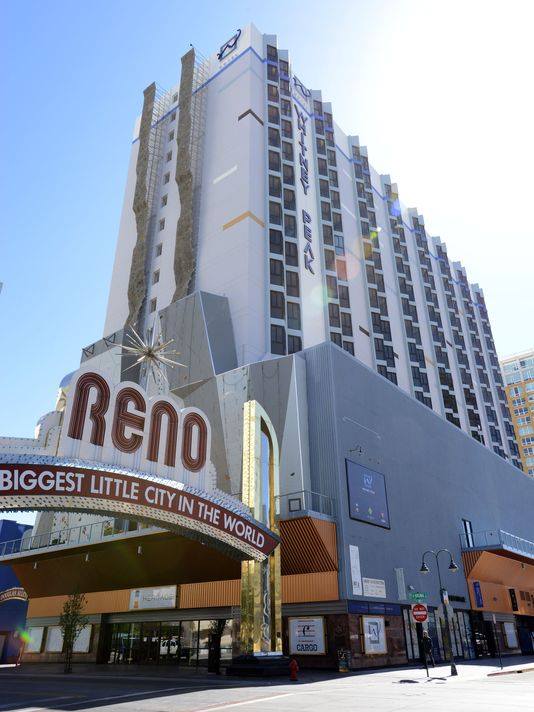 One example is the Cargo Concert Hall at Whitney Peak Hotel. Whitney Peak is located on the former site of Fitzgerald’s and CommRow (I think you can still find the Fitz Blarney Stone there if you look hard enough) and has been there since 2014. Coming down the pike for April in the Cargo Concert Hall are Agent Orange with Spice Pistols, Sleeping with Sirens and The Amity Affliction with Stray from the Path and UNITYTX, and Beats Antique rescheduled from original dates in 2020. Photo at right: Facebook, Whitney Peak Hotel.

And check out The Office down on the Riverwalk. More formally known as The Office of Hughes & Porter Bar & Lounge, this high-class watering hole has Cece Censor performing in April, with more acts to follow later in the year. Like all good venues in downtown Reno, The Office has a history so real and interesting and immediate that you can practically reach out and touch it. And they pay homage to their roots in the name of the business, so be sure to ask them about it the next time you stop in.

The Virginia Street Brewhouse has the Como La Flor Band – Tribute to Selena booked for April. This downtown hotspot has a great space on the first-floor stage for an act like this, but don’t forget about the Denim Lounge upstairs. Remember what I said about these places having a great history? The lounge gets its name from the jeans factory that used to be located in this space.

For those of you who just absolutely have to be able to gamble under the same roof where you listen to live music (or if you happen to like both types of music…Country and Western), the Grand Sierra Resort has you covered in April. Easton Corbin will be playing in the Grand Theater, and he promises that some fiddle and pedal steel are on the playlist. Now, given the size of the GSR, you may not feel as if this concert is under the same roof as the gambling, but don’t worry too much because just like roads and Rome, all corridors in a casino eventually lead to the gaming area. Photo at left: Facebook, Grand Sierra Resort.

Fingers crossed, April’s opportunities for live music are just the beginning of a great season of entertainment for the Biggest Little City.